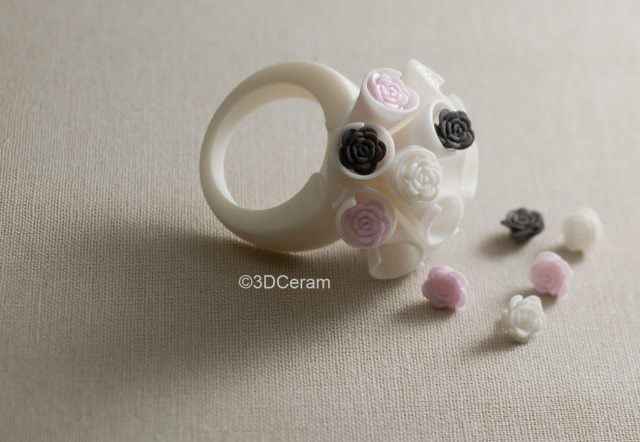 While ceramics may be among the oldest and most widespread of materials used by humanity, ceramics 3D printing has a much more narrow set of applications. For that reason, there are only a handful of companies that manufacture 3D
printers specifically for 3D printing with ceramics. Among them is the French firm 3DCeram, producers of the Ceramaker 3D printer. 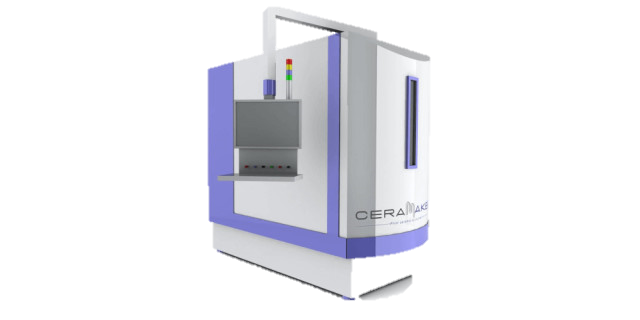 In addition to high resolution and accuracy, the Ceramaker produces high-strength parts with a low coefficient of thermal expansion, low density, high abrasion and corrosion resistance and good chemical stability. Unused material can be recycled and reused to decrease material wastage.
​

The coloring options for parts printed with alumina, on the left, and zirconia, on the right. (Images courtesy of 3DCeram.)
The materials produced for the Ceramaker so far have various distinct characteristics. Alumina, or aluminium oxide, is an electrical insulator with high thermal conductivity, hardness and resistance to wear and chemicals. The material is, therefore, suitable for use in cutting tools, as an abrasive or for use in electronics.

​
The Ceramaker 3D printer from 3DCeram. (Image courtesy of 3DCeram.)
Zirconia, or zirconium dioxide, has high thermal stability, good hardness and resistance to wear and chemicals, making it ideal for 3D printing jewelry. Our own bone mineral is a modified version of HA, which makes the material especially suited for creating biocompatible implants or other situations in which bone must be replaced.
How the Ceramaker Works
The Ceramaker is an SLA 3D printer, directing a 355-nm UV laser at galvanometer mirrors that deflect the light onto a layer of photocurable resin infused with ceramic particles. With each layer of a print, a blade coats the print bed in a thin layer of this ceramic paste before the laser light hardens the photopolymer within the paste. The print bed is then lowered incrementally, and a subsequent layer of paste is applied to the print bed.

The process is repeated until the object is finished, at which point the uncured paste is scraped away for reuse. As the print is gradually revealed, excess material is further rinsed off until only the desired object remains. This “green” part is then placed into a furnace, which debinds the resin and sinters the ceramic, resulting in about 20 percent shrinkage.
DETEKT, a Taiwanese 3D printer reseller and 3D printing and engineering service provider, employs a number of engineers responsible for performing such duties, including converting patient CT scans into 3D printable implants. Key Liu, responsible for quality and regulatory affairs at DETEKT, explained that post-printing shrinkage requires special care: “[U]sing this technology requires excellent CAD skills because ceramic materials experience high shrinkage of roughly 19 percent, and designs that are too thin or too thick can lead to product failure after sintering.”

The Ceramaker in Action
3D printing has become a game changer in the medical field, as it is now possible to create patient-specific implants from 3D models created with CT and MRI data. 3DCeram has demonstrated that ceramics 3D printing may have its own advantages in this specific application. The firm has spent over 10 years working with Dr. Joel Brie and the maxillofacial surgery department of Limoges University Hospital to develop cranial prostheses. Due to the osteoconductive and biocompatible nature of the hydroxyapatite material from which the devices are made, bone is able to grow more easily, thus allowing the body to integrate the implant more quickly into the body. 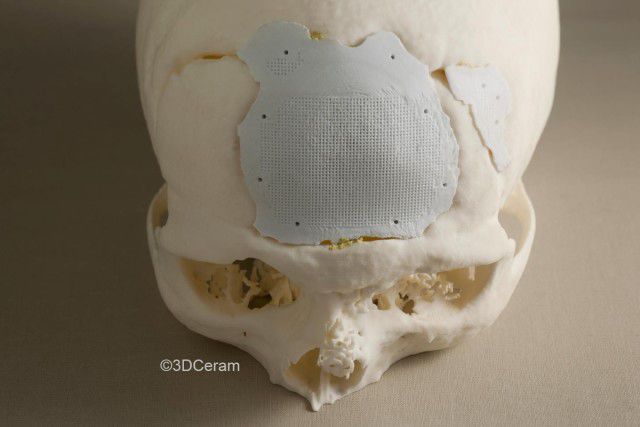 A 3D-printed cranial implant made from HA. (Image courtesy of 3DCeram.
The prostheses are 3D printed in just 48 hours before they undergo firing in a kiln. Due to the fine resolution of the printed devices, the patient fit is nearly perfect. Moreover, the implants are nearly 60 percent porous, further encouraging bone growth. After six months, about 25 percent of the porous areas have experienced bone regrowth, allowing the implants to become a true part of the patient.
Liu spoke to the characteristics of this HA material, reiterating the popularity of the material in the biomedical field, its biocompatibility and osteoconductive properties. Liu further explained that the Ceramaker can produce patient-specific implants quickly and with an accuracy of up to a 10th of a millimeter. Liu said, “Furthermore, an HA implant 3D printed with the Ceramaker has higher compressive mechanical strength than general HA used in synthetic bone graft. These implants are an alternative to the osseous grafts that very often come from the patient, and thus HA implants can prevent them from experiencing additional pain. Ceramic implants are also well suited for reconstruction of bone defects, and the cosmetic result for the patient can be quite satisfactory.”
The implants range in price from EUR€10,000 (USD$11,197) to EUR€18,000 (USD$20,155), but the benefits are hard to ignore. Since the hospital first began using the technology in 2005, 17 patients have received 3D-printed implants. According to Dr. Brie, none of these patients has encountered any infection. The full results of the hospital’s clinical trials were published in 2013 and can be found here.
Manufacturer: 3DCeram
Model: Ceramaker
Material: Alumina, zirconia or HA
Build Envelope: 300 mm x 300 mm x 110 mm (11.8 in x 11.8 in x 4.3 in)
Layer Thickness: 25 microns (0.001 in)
Printer Dimensions: 1,000 mm x 2,300 mm x 2,300 mm (39.4 in x 90.6 in x 90.6 in)
Printer Weight: 1,450 kg (3,196.7 lbs)
Recommended Uses: Jewelry, biomedical implants and electronics or industrial components.
Machine Price: USD$323,000 (EUR€290,000)

Who Should Use the Ceramaker:
Given the Ceramaker’s ability to 3D print a select number of ceramic pastes, the machine is ideal for jewelry, medical, electronics and other specialty industrial applications. While it is, on the one hand, capable of 3D printing jewelry resembling polished stone, it can also be used for patient-specific, biocompatible implants. The build volume is sizeable enough to 3D print large batches of jewelry or components for the electronics industry.

Why You Wouldn't Use the Ceramaker:
The Ceramaker is capable of 3D printing prototypes, but may not be the most ideal machine for such an application. Instead, traditional SLA, fused deposition modeling or digital light processing 3D printers may be more suitable. Additionally, if you’re looking to 3D print other types of ceramics, such as clay, this is not the ceramics 3D printer for you. 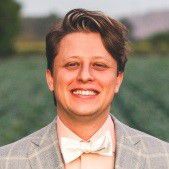 Michael Molitch-Hou is the Editor of ENGINEERING.comÆs 3D printing section. Michael previously served as Editor-in-Chief of 3D Printing Industry and has covered additive manufacturing technology day in and day out since 2012 and has hundreds of article to his credit. He is the founder of The Reality Institute.
返回列表
喜歡這篇文章嗎?分享給朋友知道!